From The Earth Brewery 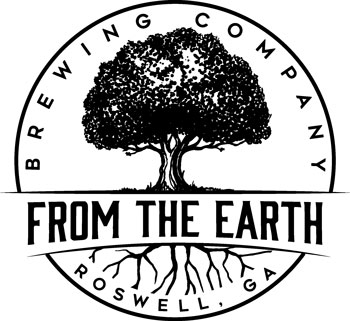 In this episode of Life in Roswell realtors Matt and Jeremey meet with Tim Stevens at From The Earth Brewing Company, a Roswell brewpub with amazing food made with premium ingredients and a lot of love and well-balanced craft beers.

Tell Us About From the Earth Brewing Company

We tried to repurpose as many things as we could here at FTE when we were opening. This was actually made by a local friend of ours who lives right down the street. It's a repurposed wine barrel. He actually did most of the lighting in the restaurant. So here's another piece that he did. These are actually the wine bands that hold the barrels together that he spun around some Edison bulbs. All of the wood on the back bar is repurposed. He also actually did the tap handles at the back bar as well. They're repurposed wine stays.

As you can see, we do offer more than just beer. We're a brew pub, so we're able to do wine, liquor and beer.

So actually I apologize for this space over here. We're getting ready to set up for live music tonight. We've got a big band coming in this evening. We do a lot of music. There's three passions we like to say here. We have a passion for food, beer, and live music.

So this is our brewers area, our brewer's table. It's got great views of the whole brewery, can accommodate up to about 12 people. We also have our wine storage here, and it is a semi-private area, so we can close these for private events.

Can You Show Us Around The Brewery?

Great. So this is all American made steel. It was custom made for us out of Detroit, Michigan. Kevin McNerney, who started Sweetwater Brewing, was bought out about six or eight years ago, started a consulting company. I hired him to come in to design our brewery and help me get the custom fit for these tanks as he had 25 years of experience. He came in, we hit it off and he was actually our brewmaster here for about a year and a half. So it kind of got us off on the right foot and trained our current brewmaster, Brian Lee, under him for the year and a half. So I'm really excited about that. Yeah, so this is kind of how the brewery's set up. These are all our bright beer tanks. You can tell because they're flat bottom tanks. We have them actually hard. We have a chase that runs under the ground right up to our back bar, so we're pouring directly from those tanks. We feel the less you maneuver the beer, the better the beer is going to taste. So it's a pretty small production facility. We sell most of this on site. We do distribute a little bit out in the market through National Distributing. But most we actually serve right here. We like to change up the varieties constantly. We want to have the guests, I want them to experience a different beer or a different experience, whether it's food or beer or a cocktail, every single time they come in. So the beers are always changing.

Tell Us About Your Beer Selections

Can We Try A Few Of Your Beers?

So let me go through them real quick from left to right. Our Gold Nail is one of our year-rounds that I mentioned earlier. This was always year-round. We played a little bit this last brew with the bittering hops, so I think this is the best one by far, and this is going to be our new recipe from this point out. So this is a Pilsner, a single hop Pilsner. We use Eldorado hops, which gives it a little earthiness and a little lemon flavor. At 5.1%, it's not going to crush you if you have beers in the afternoon where the rest will.

So this next beer is one we released last week. This is a Belgian triple called Third Eye. It's coming in at 9.7%, so this one definitely has a little bite to it. It's one you need to pace yourself on. This is not an all day.

This one is pretty interesting. The flavor characteristics coming from that mainly are coming from the Eastern that we use. We use a Trappist style, Chimay yeast blend that that really gives it that banana and some spices in there as well.

Here is a collaboration we did between us, Variant and Gate City for the FNB Fest we had out here at the end of October.

This one is called Can't Find My Way Home. This is 10.2% triple IPA with cashmere hops, galaxy hops, and then we used Eldorado for bitterness.

This last beer is one that we've had for about a month now. This is a Midnight Rider. It's a 7.2% Porter. This is one of the only beers that we add adjuncts. So we add some cocoa nibs, so it really becomes more of a chocolate porter. We were in a blind tasting last night at Brick Store, which is one of the ideal, the best beer places in the state. And we took first place with the spirits, which is really cool.

Tell Us About Some Of Your Menu Items

Let's start off with a couple of the house specialty appetizers. This right here is our Brussels sprouts flash fried with a blue cheese, bacon, little carrots on top. This is a pan seared Atlantic salmon served over kohlrabi and Swiss chard, and the kohlrabi and Swiss chard is actually sources from Martin's Gardens. I know you guys did a segment on them not too long ago.

This is also a house special. This is our fried chicken served over Yukon mashed potatoes, grilled asparagus, and there's a spicy honey sauce over the top.

Why Did You Choose Roswell For The Home Of From The Earth Brewing Company?

Well, my wife and I live here. My kids go to school here. Roswell was always our number one choice. We were looking at downtown Roswell because as most do and fell in love with East Roswell, again, we live on this side. So the choices out here, especially for breweries and brew pubs and restaurants are a bit limited and we really wanted to kind of jump in here and change that. So with those things, you know, Martin's Lane has been a huge supporter of us. Horseshoe Bend as well. So again, it's really nice to get involved. I wanted to be in a community where not only I lived in, but I can become involved in, I can give back to the community where we live. So all of those things was the main drive or for Roswell.